The Israeli invasion in Lebanon in 1978 had serious consequences for peace and security in the Middle East. The Lebanon case in which UN was dragged untimely and unprepared in the direction of American interests in the Middle East in 1978 has been going on for 40 years. Despite all well-intentioned initiatives of the international community, the operation could not achieve the mandated tasks given by the Security Council yet. UNIFIL has been stuck to its area of operation, because the problems between Israel and Lebanon cannot be solved independently from conflicts in the Middle East.
The distinctive characteristic of the Lebanon case has been the duration of the operation that spanned the Cold War and post-Cold War periods. Hence, the changes in the security environment, new challenges, and emergence of the second generation of PKOs can be understood more clearly. By having exposed the problems throughout the UNIFIL operation, the book is expected to benefit researchers, scholars, and decision-makers at the UN headquarters in setting up a framework to deal with possible challenges for the future PKOs. 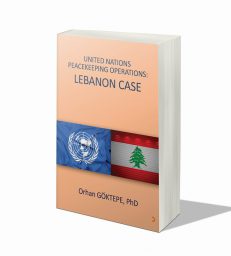