Kunaka is an artificial language created by the language expert Mr.Orkun Ateş, who can speak 7 more languages including Turkish, English, German, Spanish, Arabic, Swahili and Chinese. Kunaka language was first created and developed to be used in a Science Fiction book titled as The Darkside of the Moon, Volume 1: The Rise of The Kun People Against Sonach Empire written by Mr.Orkun Ateş as the language of an alien race, The Kun People. Another artificial language which is also used in the same science fiction book as the language of the second alien race, (Sonach Empire) Sonach language is to be completed soon.
Kunaka language has two alphabets, one is composed of latin letters and the other one is composed of its own characters. While the Latin letters enables the reader to learn the language with ease, the other alphabet known as Kun Alphabet gives its characteristics and uniqueness to the language. Moreover its grammer structure is quite different from other known languages making the language the first of its kind.
The readers are given the chance to test and improve themselves at the end of each chapter with the help of chapter tests. Moreover a general test is provided at the end of the book to repeat all the topics covered by the book and check their Kunaka language proficiency level.
Moreover many Kunaka speaking related events will be organised to form a Kunaka speaking community fast and effectively. Video lessons on grammer and pronounciations will be provided as well on social media platforms such as youtube channel and whatsapp groups to support the Kunaka speaking community.
It is certain that a Kunaka speaking society will be emerged from all over the world and this circle will expand exponentially like a rolling snow ball and this book is the first step to throw down this snow ball from the hill. 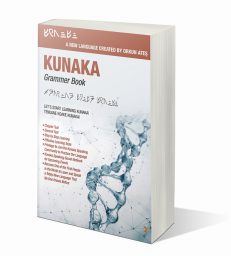