Economic Crises of the Turkish Republic

Economics is a study of cause-and-effect relationships in an economy. It’s purpose is to discern the consequences of various ways of allocating resources which have alternative uses. It has nothing to say about philosophy or values, anymore than it has to say about music or literature.
Thomas Sowell
Based on research, a direct relationship was found between Turkish politics and its economic condition. Since the independence of Turkey in 1923, Turkish government has played a vital role in its economic and social growth. The inefficiency of the Turkish government’s interferences was proven by the common occurrences of economic crises in Turkey during the last nine decades. Even the current economic stagnancy in Turkey is due to the political and personal objectives of the Turkish government, which limit the autonomous operations of the Turkish Central Bank. This book highlights the causes and consequences of various economic crises, which have restricted the economic growth of Turkey since its independence. 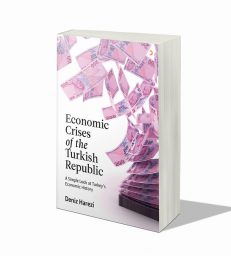