Filippi syndrome is classified in the group of craniodigital syn-dromes. The patients have short stature, microcephaly, intel-lectual disability, developmental delay, characteristic face and syndactyly of fîngers and toes as the prominent phenotypes. It is inherited as an autosomal recessive fashion with mutations known only in the CKAP2L gene. I ascertained a Filippi syndrome family from Italy and identifıed a de novo mutation, NM_001320.5;c.94G>C;p.Asp32His, in the CSNK2B gene, which I proposed as a second and novel gene of this disorder. CSNK2B encodes CK2(3, which is the regulatory subunit of protein kinase CK2. This holoenzyme is a heterotetramer of the following compositions — a(3(3a, a(3(3a’ or a’|3|3a’, where two a and/or a’ subunits are structured around the obligate (3 dimers. To investigate the consequences of the mutation, lym-phoblastoid celi lines (LCLs) I generated from patient and con-trol. Initially, I studied the consequences of the identifıed mutation at the RNA level and revealed that the amount of mutant CSNK2B transcript was higher compared to control. I propose that an altered level of CK2(3 may impair the embryogenesis and produce drastic effects during development. 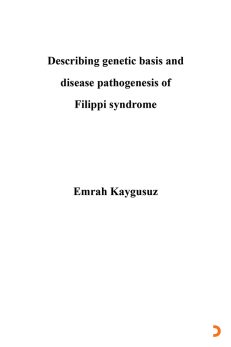