BULDING A NUCLEAR EMPIRE: NUCLEAR ENERGY AS A RUSSIAN FOREIGN POLICY TOOL IN THE CASE OF TURKEY

This book examines the dynamics of Russian foreign policy between 2000-2019 by specifically focusing on the civilian aspect of nuclear energy and how it shapes Russia’s relations with Turkey. It aims to clarify the role and the importance of nuclear energy as a foreign policy tool, specifically in the case of Turkey. To this end, Russian nuclear energy policy is scrutinized in detail. This book reveals that the marketing and trading of nuclear power plants (NPPs) for civilian purposes not only provides surpluses for Russian economy but also increases the influence and power of Russia over those places where nuclear reactors are sold or other nuclear goods and services are supplied. Specifically, it examines the extent of the influence of the exportation of NPPs on the Russian foreign policy dynamics in Turkey. In this context, first a brief historical background information on Russian nuclear power status as well as the utilization of nuclear energy as a foreign policy tool during Putin’s presidency is given. This is followed by the Russia’s nuclear energy policies towards Turkey and the effects of this policy on the Russian foreign policy dynamics in Turkey. The book concludes that the Akkuyu NPP project will result in Moscow’s domination in the foreign policy dynamics between Turkey and Russia. As a result of such dominance Turkey will become much less sovereign in its foreign policy options and will feel the pressure coming from Moscow about the possible consequences of its actions which will not please Russia. The primary methodological tool of the work was qualitative analysis utilizing primary and secondary sources in Russian, English and Turkish on the topic, including academic books, articles, newspapers, magazines and relevant official websites. 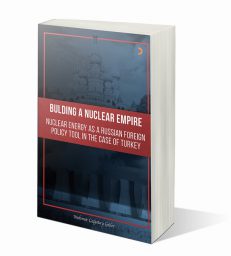