African Politics: Deceptions Of Witchcraft And The Occult

This book has been written for the sons and daughters of Africa to wake up and take contingent action. An important starting point is to ask where Africa is in the 21st century when other countries that were one time poor like Malaysia, Singapore, China, Indonesia, and India are making the headlines today with stunning economic growths.
Based on interviews and literature reviews this book admits that the unseen, hypocritic legislation and practice of magic and occultism at the higher levels of the state as this book sees it, are a corruption and disease of religion, national security, national development and the smooth integration of the country into one prosperous whole. Therefore, to think that witchcraft and sorcery can develop a nation is a farce and a serious policy mistake that necessitates being overhauled.
The subjective and broad based conclusion is that Africans must rise now and take affirmative action before the aristocracy and kleptocracy sells the entire continent for a mussel of bread and sensation of vain perishable power.
Real change is not given  its taken by fire and by force. 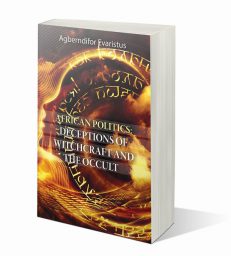